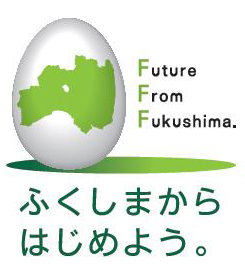 in cooperation with the State of North Rhine-Westphalia

What customers say:
“Thank you for your interpreting service at the time of our last visit to Germany.  With the help of your service, we enjoyed a much smoother communication with our German counterparts.”
“We appreciate your ability to cope with all kinds of situations. Having following past negotiations as an interpreter, you are familiar with the necessary background information which made us confident to entrust you with this interpreting assignment.”    (Member of Fukushima Prefecture Delegation)

Comments by Translation Service S. Arai
In my function of interpreter, I had the honour of witnessing the historical moment of signing these two Memorandums of Understanding.  Furthermore, I repeatedly accompanied members of Fukushima delegations and gained valuable experience as an interpreter by getting to know the state-of-art technology at first hand.
My ties to Fukushima Prefecture do not end there, however. I have been helping a Fukushima company exhibiting at the MEDICA/COMPAMED over several consecutive years as a booth attendant.  In the field of renewable energy, our office has been entrusted with appointing interpreters for the Fukushima joint booth through an official tender by Iwaki Cooperative Support Network Association (ICSN).
Although my contribution may be small, I feel delighted with the opportunity of being able to serve Fukushima Prefecture in its post-tsunami construction efforts. 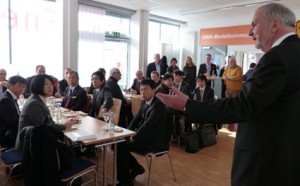 Fukushima’s delegation welcomed  by the Mayor of  Saerbeck,
a model community for climate protection in NRW

Fukushima Prefecture formed an alliance with the State of North Rhine-Westphalia (NRW) in its efforts of reconstructing the region hard hit by the Great East Japan Earthquake of March 2011.  By making use of JETRO’s (Japan External Trade Organization) RIT (Regional Industry Tie-Up) programs, Fukushima Prefecture has been supporting business exchanges in both regions.
These efforts finally resulted in the signing of a Memorandum of Understanding (MoU) to promote cooperation in the field of renewable energy with NRW’s Ministry of Environment in February 2014 followed by the conclusion of another MoU in the field of medical equipment with NRW’s Ministry of Economic Affairs, Energy and Industry in September of the same year.
In this connection, Fukushima Prefecture sent many delegations to NRW including delegations from leading Fukushima companies while also visiting local companies in the State of NRW.
Among others, the said MoUs set a target of business exchanges through mutual participation in trade fairs and exhibitions in both regions.  Under this scheme, manufacturing companies from Fukushima are taking part in the MEDICA/ COMPAMED, a medical trade fair held in Düsseldorf while NRW companies have exhibited at Medical Creation Fukushima<http://fmdipa.jp/ >, a medical construction and manufacturing trade fair held in Koriyama City.  In the field of renewable energy, Fukushima and NRW are promoting similar exchanges at the E-Word, a trade fair of the energy and water management industry held in Essen as well as at the REIF (Renewable Energy Industrial Fair) of Koriyama City.