What customers say:
“As a choreographer of a contemporary dance company based in Japan, I have been asking Sumiko for years to translate my conceptual notes and newspaper reviews on my works into English for our overseas public realtions. Describing dance in written words often falls into the trap of being too abstract or prosaic. Straightforward translation will not work. Any writing, translation including, on dance works should provide a glimpse of the philosophy behind them or it will not be a true portrait of dance. A cultured mind and a wide perspective are essential for appreciating these fine points. In this regard, I am quite happy to have Sumiko on my side as a reliable translator. When I read her translations, I feel that my choreography work gains another dimension through her linguistic creativity – enrichment for my work!” 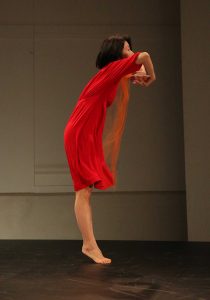 “Dizziness”
Dizziness is not a physical symptom.
To me, it is more like a cloud of turbid emotions.
With is blurred and hazy outline,
it cannot be readily defined in clear words.

.. I let myself drift into a world of dizziness.

This work piece does not suggest a direct association with any messages or stories. Instead, the audience sees individual bodies making their undeniable mark on time at that very moment of their existence. 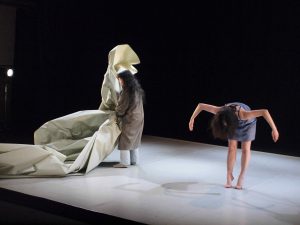 Hailing from Kobe in Japan and a graduate from the Dance Department of Folkwang Hochschule (State University) of North-Rhine Westphalia in Germany. Based on a solid foundation of dance methodology acquired in Germany, Oka has been producing dance pieces which address existential questions of human life using human bodies as a means of expression universal to anyone in today’s world. Active collaboration with musicians and visual artists on stage. Regular participation at the Kazuo Ohno Festival since 2010. Her works were also shown in Europe within the framework of the Program of Overseas Study for Upcoming Artists run by Japan’s Agency for Cultural Affairs. Her recent works include "Mayoi/Unsettled Mind", the current “Flying Classroom” and "Der Grüne Tisch 2017". Recipient of the Kobe Nagata Cultural Award in 2014 and of the Kobe Art Award in 2018. http://ensemblesonne.com